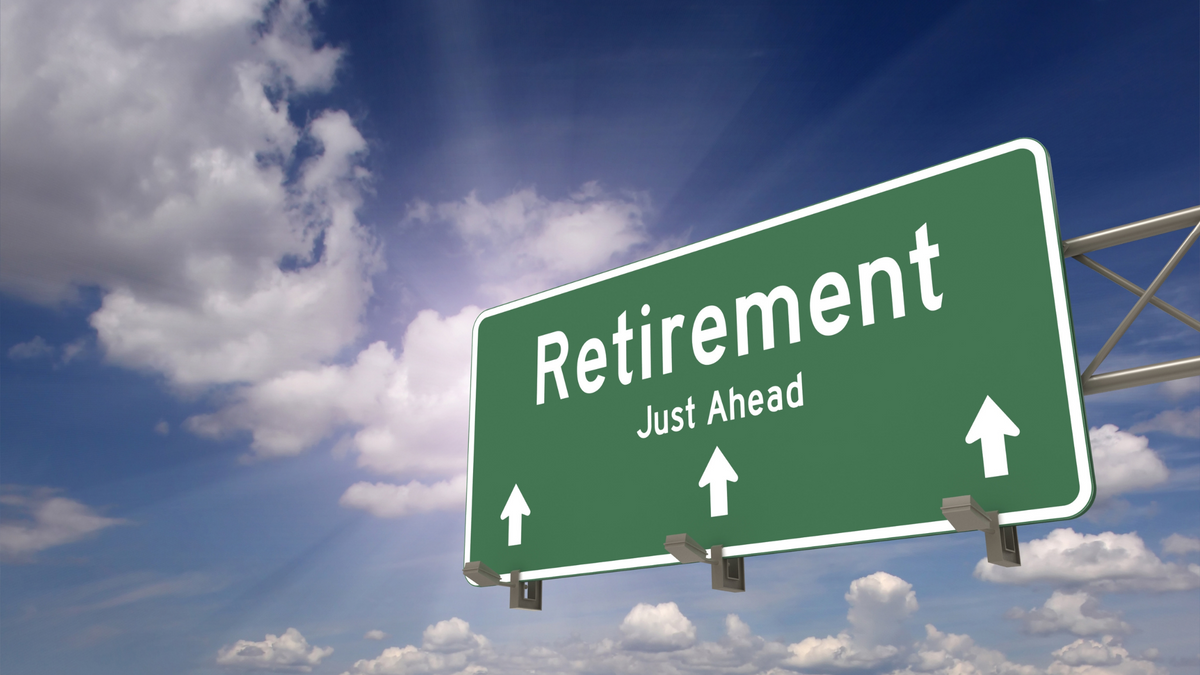 Connecticut vs Colorado: Where to Retire?

We've covered the pros and cons of retiring in Connecticut and Colorado, but in today's blog, we compare the two to help make that life-changing decision a little easier.

Many people choose to move somewhere different to spend their golden years in a beloved place that provides comfort and resources.

Whether you're considering moving out of, into, or remaining in Connecticut or Colorado for your golden years, Agemy Financial Strategies can help.  As a financial firm based in Connecticut, with offices in Colorado, we can offer you first hand experience and knowledgeable advice on how to manage your retirement in these beautiful states.

First, here’s a look back at some of the pros and cons to think about.

Pro 1: The crime rate in Connecticut has been steadily falling

Did you know that Easton, Ridgefield, and Madison top the state’s safety rankings? Just another reason to spend your retirement here. There’s a sense of safety which is comforting to anyone. Connecticut is well known for its great small community atmosphere. Many residents boast their small town feels more like a family.

Some of the best cities to live in are in Connecticut because their record of safety continues to improve. The state is experiencing its lowest crime rate in decades, with the overall ratio being about 20 incidents per every 1,000 residents. The rate of violent crime is only 2 per 1,000, which makes most communities a safe place to raise a family and let your kids outside to play in the front yard. Compared to other places you could live along the East Coast, you’ll find Connecticut has a lot to offer.

Debate all you want about quality of life in Connecticut, but duration of life in the state is indisputable. Connecticut has the fifth-highest life expectancy in the United States, according to data provided by the Centers for Disease Control and Prevention.

Connecticut residents can expect to live an average of 80.4 years, with females at 82.9 and males at 77.9. The findings, published earlier this year in the National Vital Statistics Reports, reviewed 2018 population estimates, state-level mortality and each state’s death and population figures that year for older Medicare beneficiaries.

Con 1: The cost of a house is high in Connecticut

The pandemic has sent CT house prices through the roof and drained the inventory.

Zillow reports that the median home value in Connecticut is about $348,047. With an extremely low supply of available homes for sale and skyrocketing demand, some would-be buyers feel as though it is becoming increasingly difficult to afford the cost of moving into a new home. The highest median home price and most drastic change over the last two years is in Fairfield County, where there was an increase of 43.5% to more than $400,000.

How long can this housing spike remain? That all depends on the supply. According to the Berkshire Hathaway HomeServices report, total 2022 home sales are not expected to reach 2021 numbers simply because Connecticut real estate agents are running out of inventory.

Con 2: The cost of living is high in Connecticut

There’s no point in beating around the bush here: Connecticut is an expensive state, and living costs are higher than the national average. The cost of living in Stamford (one of Connecticut’s most expensive cities) is only 17% lower than Manhattan, New York. Compared with all other states, Connecticut has the eighth highest overall cost of living.

In general, living in dense, urban metro areas is more expensive than living in more rural areas. Connecticut is home to four metropolitan areas. The most expensive in the state is the Bridgeport-Stamford-Norwalk metro area, where the cost of goods and services is 15.3% higher than the national average and 9.2% higher than the statewide average. If you can afford to live here, then there are plenty of advantages for you to enjoy. Fewer people are finding it possible to do. Plus the rural areas present a cheaper-cost of living if you want to spend your golden years out of the metro hustle and bustle.

Colorado rounds out the top ten for overall health care in America. The state has some of the highest-quality medical care available with access to top-level hospitals. Though some remote areas may lack the ease of access, most of the population is never far from premium medical care.

Additionally, health care costs less in Colorado than in many other states. Thanks to significant policy moves, Colorado made strides to improve affordability and serve as a model for other states.

Pro 2: Retirement Communities are an Abundance

Traditionally, people tend to retire in warmer states such as Florida. You might be surprised to see that trend change as more retirees venture to Colorado. The state saw a significant jump in the number of people retiring there since 2010.

Aside from having more people your age to connect with, Colorado has some impressive retirement communities to make it even easier. Get the best of everything with neighbors your age and loads of activities to keep you as social and busy as you want to be.

Con 1: Prepare for the Cost of Living

One of the biggest things that Colorado and Connecticut have in common is that the price of livin in both states is high. The Taxes are better in Colorado, but you may notice a bump in the cost of living. Depending on where you currently reside, you may need to pay a little more for some things.

While you may pay substantially more for housing, you should only see a slight uptick in groceries and transportation. On the other hand, most people should see a drop in health care costs and even spend less on utilities. It’s a good idea to do your research so that you don’t get sticker shock! Try using a comparison calculator for a ballpark idea.

Con 2: Being Mindful of Wildlife

There are a lot of pros to being surrounded by nature, but the biggest con would be being mindful of the wildlife that comes with it. Some people love to see moose, deer, and other beautiful animals roaming through their yards, but not all Colorado wildlife is welcome. Colorado has some dangerous creatures that can do damage if you’re not prepared.

Though animal attacks remain rare in Colorado, it’s still something to consider before retiring there. Education goes a long way, and you can easily prepare to handle the wildlife. Here’s a rundown of the most common animals that could pose a risk.

According to BestPlaces.net's 2022 Cost of Living Calculator: Denver, Colorado vs Hartford, Connecticut

A salary of $100,000 in Denver, Colorado could decrease to $71,082 in Hartford, Connecticut (assumptions include Homeowner, no Child Care, and Taxes are not considered.) 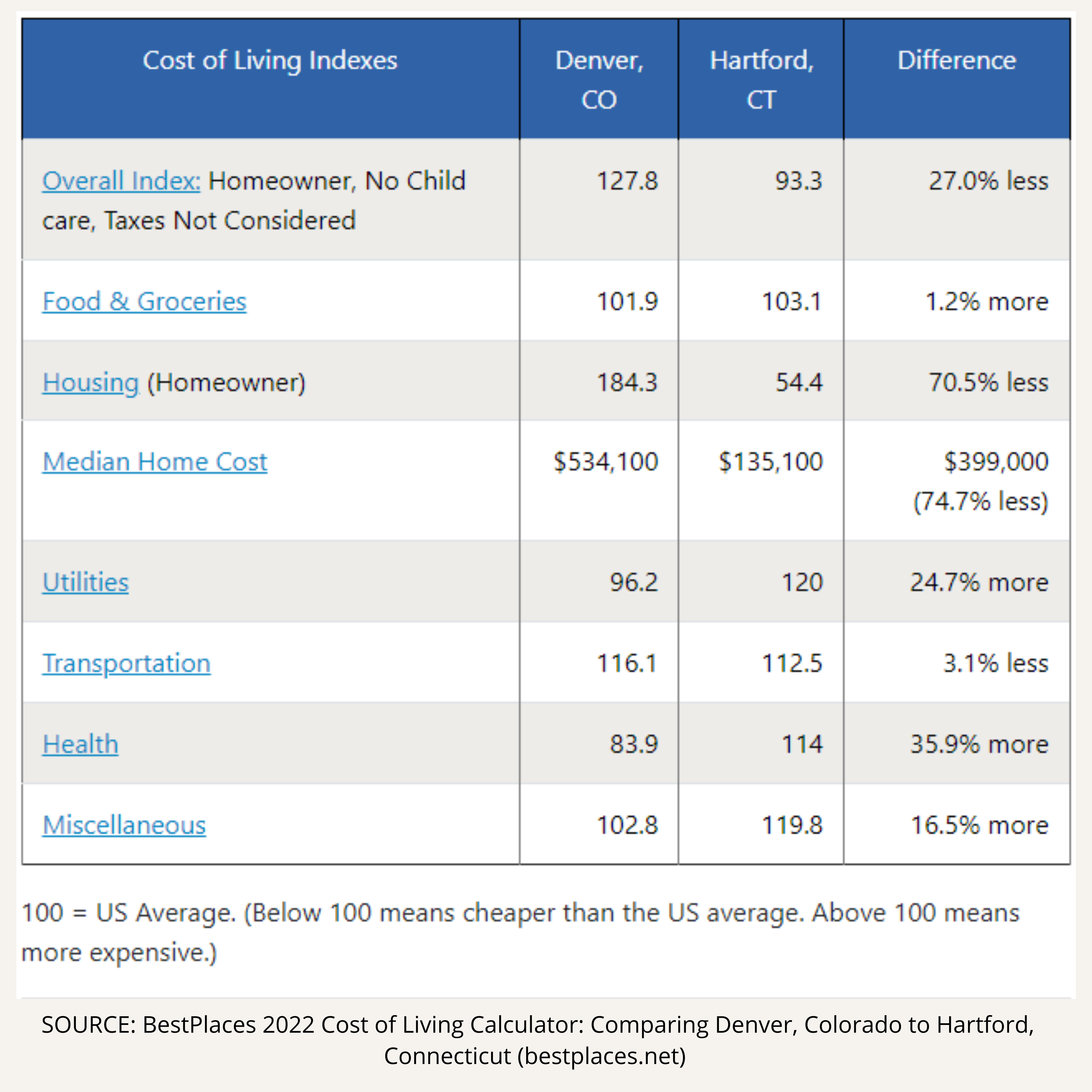 Now that you know some of the pros and cons of retirement in both states, it's important to look at your retirement plan and see if this is something that would benefit you. Both states have a lot to offer. Once you have estimated the amount of money you may need for relocating in retirement, a sound approach involves taking a close look at your potential retirement-income sources.

At Agemy Financial Strategies, we want you to know we’re here to help you navigate retirement and any questions that come up during your retirement process, including relocation opportunities. As Fiduciary advisors, it's our duty to act on your behalf in finding the right solutions for your individual wants and needs.

For more information on our retirement and financial planning services, contact us here today.